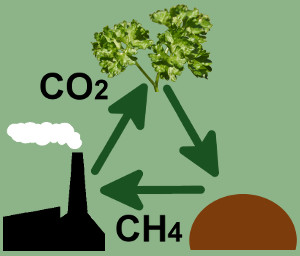 With Camstar being the largest producer of dried parsley in Europe it's not surprising that we have a fair amount of waste. The majority of this is stalk, which is separated from the leaf after drying.

During the parsley harvest skips full of waste are taken to the local Barley Brigg Biogas Ltd. site where they are treated in an anaerobic digestion chamber. A selection of micro-organisms breaks down the parsley stalk through a number of stages, ultimately converting the majority of the available carbon compounds into methane.

This methane is then burnt in Barley Brigg's gas power plant to produce electricity, the products of combustion being carbon dioxide and water.

Although the carbon dioxide produced is released into the atmosphere the whole process is, in principle, carbon neutral. As it grows the Parsley obtains it carbon from atmospheric carbon dioxide, converting it via photosynthesis into the various compounds that it needs to live.

The other product of the process is called 'digestate', it’s the left over matter once the anaerobic digestion is over. Even this can be used as fertiliser, so absolutely nothing is wasted.